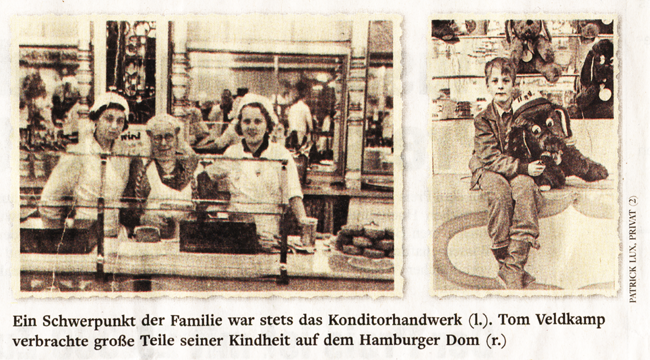 The Veldkamps, originally from Holland, are the oldest family of performers in the city
■ In 1821, the family started with a first café
■ Today you will find a shop of the Veldkamps FREDERIKE GEHLENBORG at almost every cathedral corner
As a young boy, Tom Veldkamp loved the hustle and bustle: He often spent small races in car scooters with friends and liked to ride fast carousels.
But while for his friends the fun was often quickly over, Tom Veldkamp, as the son of a show family, was able to do many more laps for free with the rides.
He is now 35 years old and has long since followed in the footsteps of his ancestors:
Tom Veldkamp is also a showman and has a club at the Duomo of Hamburg.
In doing so, he has continued a long tradition, as the Veldkamps are the oldest family of performers on the cathedral.
They have been operating stalls on northern Germany’s largest Kirmes for 189 years. The history of the showman family began in 1821:
At that time, the Dutch Veldkamp family came to Hamburg and set up a pastry café in the cathedral at Gänsemarkt.
The then owner Pieter Jacop Veldkamp soon handed over the tour of the cafe to his son Sijmon.
A few decades later, he passed on the sugar bakery recipes to his daughter Anna Wilhelmine Catharina and thus continued the family tradition.

“Under the diligent hand of my great-great-great-aunt, business flourished at the time,” says Tom Veldkamp.
“Around 1930, the once small café had become a large coffeehouse, where around 2,000 guests could enjoy cakes and other delicacies.”
Anna Wilhelmine Catharina Veldkamp, often affectionately called “Mother Veldkamp” in family circles, had not only a sense of business, but also a heart for children. Every year, for the Christmas season, she invited Hamburg orphans to her café for a full day of hot cocoa and lard biscuits.
Tom Veldkamp only found out about the charity of his great-great-great-great-aunt last year when he worked up the family history with her former housekeeper.
This in turn inspired the showman to take his own deeds: “To remember our mother Veldkamp and her charity, I came up with the idea of burning gold almonds,” Veldkamp said. These almonds are made according to a traditional family recipe and then coated in gold leaf. Meanwhile, the specialty is not only available in his brother Jan’s sugar cart, but also in some delicatessen shops to buy.
In addition to working as a sugar baker, Tom Veldkamp has a lot to do with his playing club’s business. Here, for example, the fairground visitors can win plush toys at gripper machines. On the current winter dome, an HSV dragon and “Shaun the Sheep” are particularly popular with the younger guests. Next year, however, completely different cuddly toys can be at the top of the wish list.
“We always want to go with the trends and always offer our visitors something new,” says the showman. His parents Anneli and Jan Veldkamp also come up with a novelty two years ago: They invented the Lotto bingo.
In gambling, at ten vending machines 500 balls are mixed-orange balls are winnings and white balls rivets.

But not only new inventions, but also traditional rides and snack bars are in demand by visitors to the funfair – such as Jan Veldkamp’s sugar trolley. ‘ There’s a lot of church visitors who buy their burnt almonds at the same stand every year.
These regular customers would be missing something if the traditional stalls ceased to exist, “says Tom Veldkamp.
Strolling across the cathedral, you’ll encounter a playbook or a Veldkamp family food stall at every turn.
Near Jan Veldkamp’s sugar cart stands Tom Veldkamp’s playbook. Shortly behind you will find a play book of his cousin Martina Voß (née Veldkamp).
Numerous distant relatives, such as large cousins, are also represented. And perhaps the family business steeped in tradition will continue in the future:
Eight-year-old Tim, the son of Tom Veldkamp, already dreams of having his own ghost train. Just as his grandfather once did.